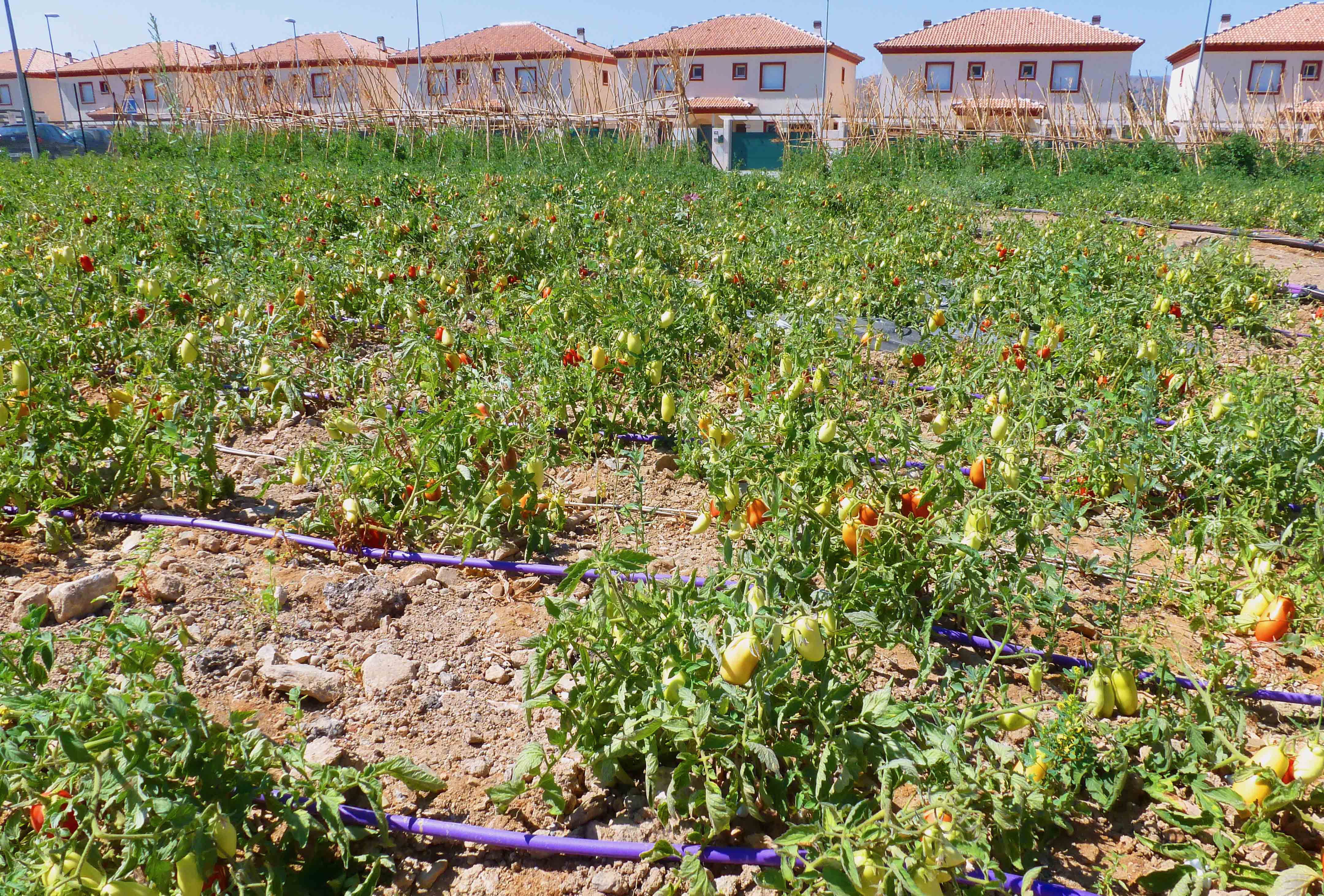 Nature-based solutions play a key role in responding to the various challenges that threaten our society, such as climate change.

Out of all nature-based solutions identified, perhaps the most common examples in our cities are urban forests, parks and green areas, vertical gardens and green roofs, community gardens, and other similar peri-urban farming practices.

These solutions have something in common: as they make use of vegetation, all of them require water and nutrients to function properly.

The lack of water can therefore be a real hurdle when implementing nature-based solutions in urban environments. In fact, there are data on the average water consumption in parks that reach up to 160 liters/m2 per year. In addition, water scarcity and droughts have increased dramatically throughout Europe during the last decades, and it is estimated that 17% of European territory suffers from water scarcity. This translates into 46% of the European population living in regions under water stress conditions. The case of Spain is especially alarming, currently in situation of drought.

At the same time, water-intensive sectors which are key for the economy, such as industry or tourism, will not only compete for this resource, but will also have priority when it comes to its use. In the case of tourism, a crucial sector for the Spanish economy representing more than 12% of GDP, water availability is a limiting factor for its development and growth. As a consequence, other water demanding activities, often considered as recreational, will take a back seat on the political agenda of many of our cities. Unfortunately, many of the nature-based solutions depending on this resource will be left unattended.

The large-scale implementation of these solutions in cities will therefore depend on the availability and access to water, as well as on the ability to optimize its use and consider alternative sources. It is here when the use of reclaimed water will be key to the success of nature-based solutions.

In accordance with Royal Decree 1620/2007, reclaimed water it is defined as treated wastewater undergoing an additional or complementary treatment process that allows its quality to be adapted to the intended use. This regulatory instrument establishes the legal regime for the reuse of water, including the quality criteria according to the specific use and the sampling frequency for the analysis of each quality parameter. The use of this alternative resource not only reduces the need to capturing drinking water, with the consequent economic, energy and environmental savings, but it also allows the use of nutrients present in wastewater, such as nitrogen and phosphorus. Hence, reclaimed water plays a fundamental role in the implementation, operation and maintenance of nature-based solutions.

Out of all uses included in Royal Decree 1620/2007 (i.e. urban, agricultural, industrial, recreational and environmental) we can identify different applications for the use of reclaimed water that can be categorized as nature-based solutions. The following table shows these uses and applications of reclaimed water in different nature-based solutions.

Uses of reclaimed water and application in nature-based solutions

EXAMPLES OF RECLAIMED WATER USE IN NATURE-BASED SOLUTIONS

There is currently a great number of real applications where the use of reclaimed water is facilitating the implementation of nature-based solutions. In fact, data from the Spanish National Institute of Statistics indicate that almost 20% of the water reused in Spain is used to irrigate gardens and leisure sports areas.

In Alicante, for example, 70% of the green areas are irrigated with reclaimed water. In 2002 the Reuse Master Plan was launched, with a budget of 8.7 million euros. This allowed tripling the green areas (parks and environmental areas) of the city and the previous 3.5 m2 of green areas per inhabitant in 2002 have now exceeded 10 m2, a value recommended by the World Health Organization. In the park L’Hort de Torrent of San Vicente (Alicante), one of the most important urban parks in the province with 33,000 m2 of trees, shrubs and grass, the implementation of a new drip irrigation system for the efficient and safe use of reclaimed water resulted in significant water and energy savings. In total, 40,000 m3 of drinking water are saved every year (i.e. 15-40% of water consumption).

In the province of Madrid, more specifically in the Ensanche de Vallecas neighborhood, the installation of a new irrigation network with reclaimed water has allowed the planting of 54,500 shrubs and creeping plants, and 72,200 m2 of grass. Also in Madrid, the Cecilio Rodríguez Garden – located in El Retiro park – was the first green area of the municipality to be irrigated with reclaimed water from the Wastewater Treatment Plant of La China. Since then, the network has expanded and has currently more than 150 kilometers of pipes, 65 storage tanks and 1,400 hectares of green areas and parks irrigated with this system. Another example is the urban forest of Valdebebas, with more than 300,000 trees and ​​almost 400 hectares (four times larger than El Retiro park), where reclaimed water from the Rejas Wastewater Treatment Plant (located 14 km from Valdebebas) is being used for irrigation.

In Castellón, there are more than 358,000 m2 of green areas already using reclaimed water. The estimated annual volume of reclaimed water for the irrigation of parks and green areas reaches 220,470 m3, which is equivalent to 88 Olympic swimming pools.

In Torre Pacheco (Murcia), reclaimed water is being used in xeriscaping practices (i.e. gardens adapted to dry climates with native species) that include efficient irrigation methods and the grouping of plants by similar water requirements.

On the other hand, in Cártama (Málaga), the use of reclaimed water has allowed the supply of water and nutrients for irrigation of community gardens, supplying tomatoes and peppers to their neighbors while complying with all safety requirements for human consumption. 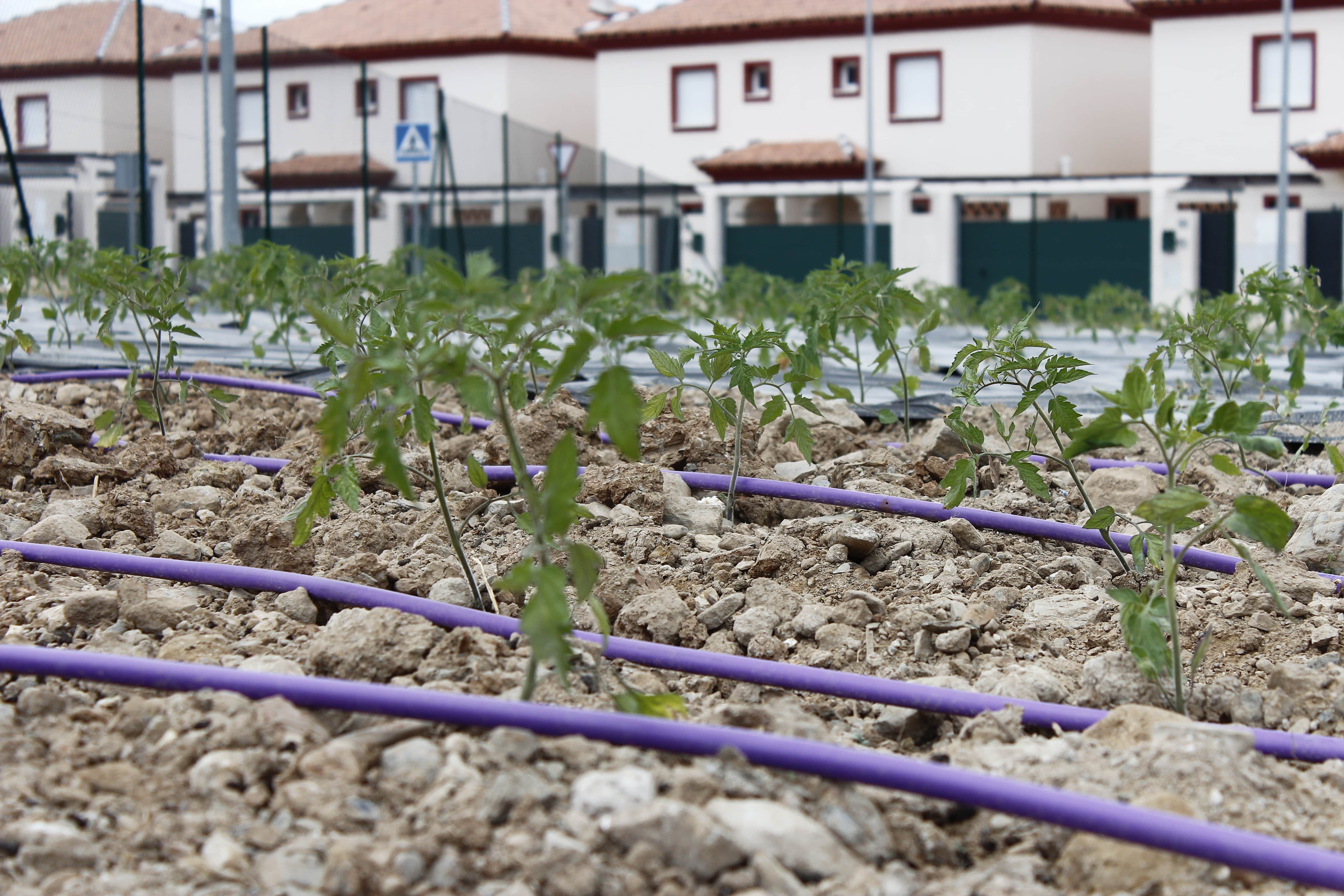 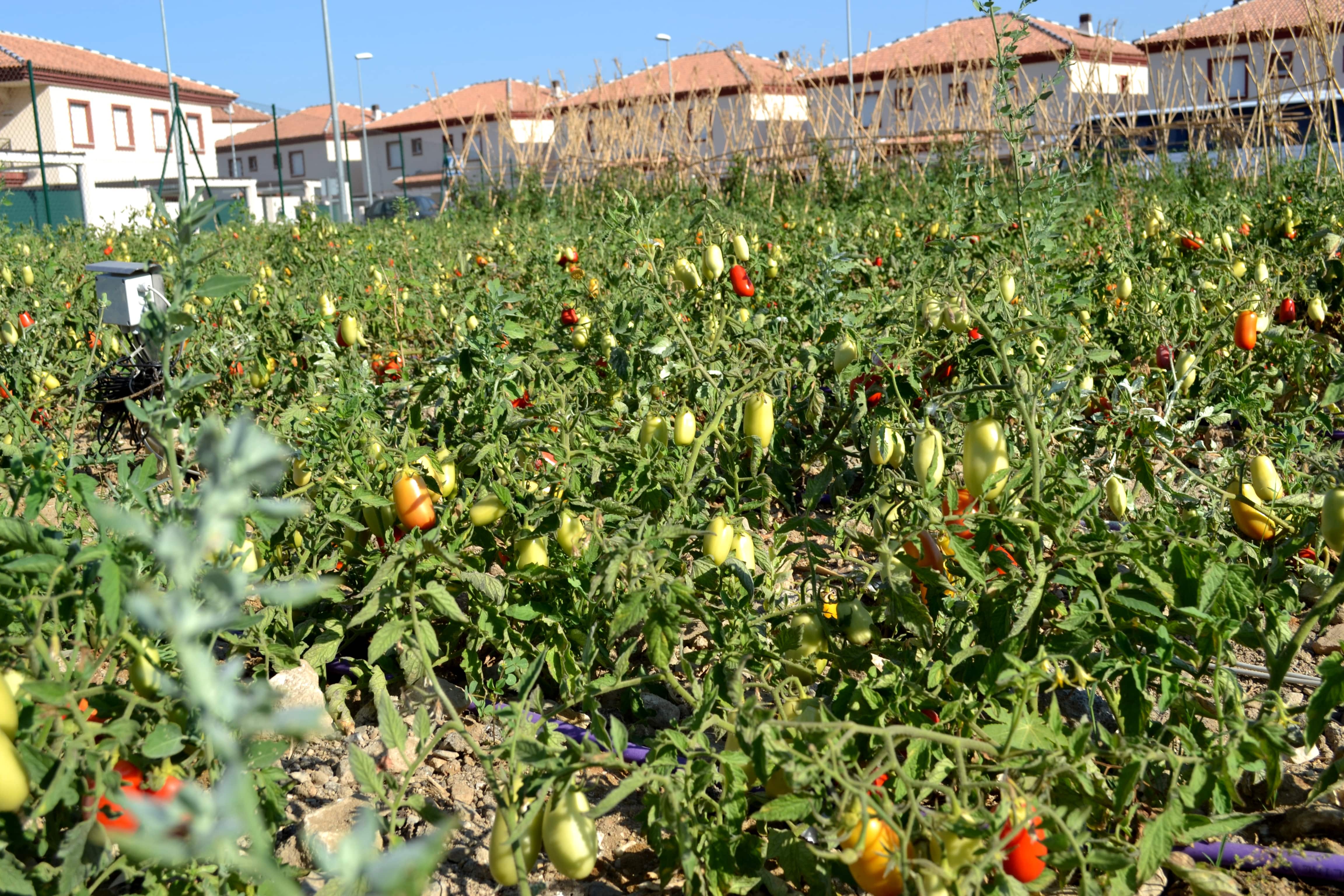 In addition, there are more and more municipalities starting to pay attention to reclaimed water. This is the case of El Ejido (Almería), which will be the first municipality in the province of Almería to use reclaimed water for irrigation of green areas and urban parks. The reclaimed water treatment capacity will be up to 4,500,000 m3 / year, which is equivalent to an area of ​​2,250 hectares irrigated with this water.

When designing, planning, implementing, managing and maintaining such nature-based solutions, the role of enterprises is essential. Within the framework of the Connecting Nature project, the term “nature-based enterprise” (NBE) was coined. These can be defined as “companies that use nature directly as a fundamental element of their products/services or indirectly contributing to the planning, implementation or operation of a nature-based solution”. Thus, we could include in this definition both a horticultural company that installs vertical gardens, an NGO for nature conservation, or a company of community interest that manages parks and urban gardens. These types of organizations can be “for profit” or “non-profit”.

BIOAZUL has been identified as a nature-based enterprise for its contribution to the sustainability of nature-based solutions that require water to function properly and deliver ecosystem services. Our technological solutions for municipal and industrial wastewater treatment and reuse can provide an additional water and nutrient source (in line with the principles of the Circular Economy) during the implementation, maintenance and operation phases of these nature-based solutions. 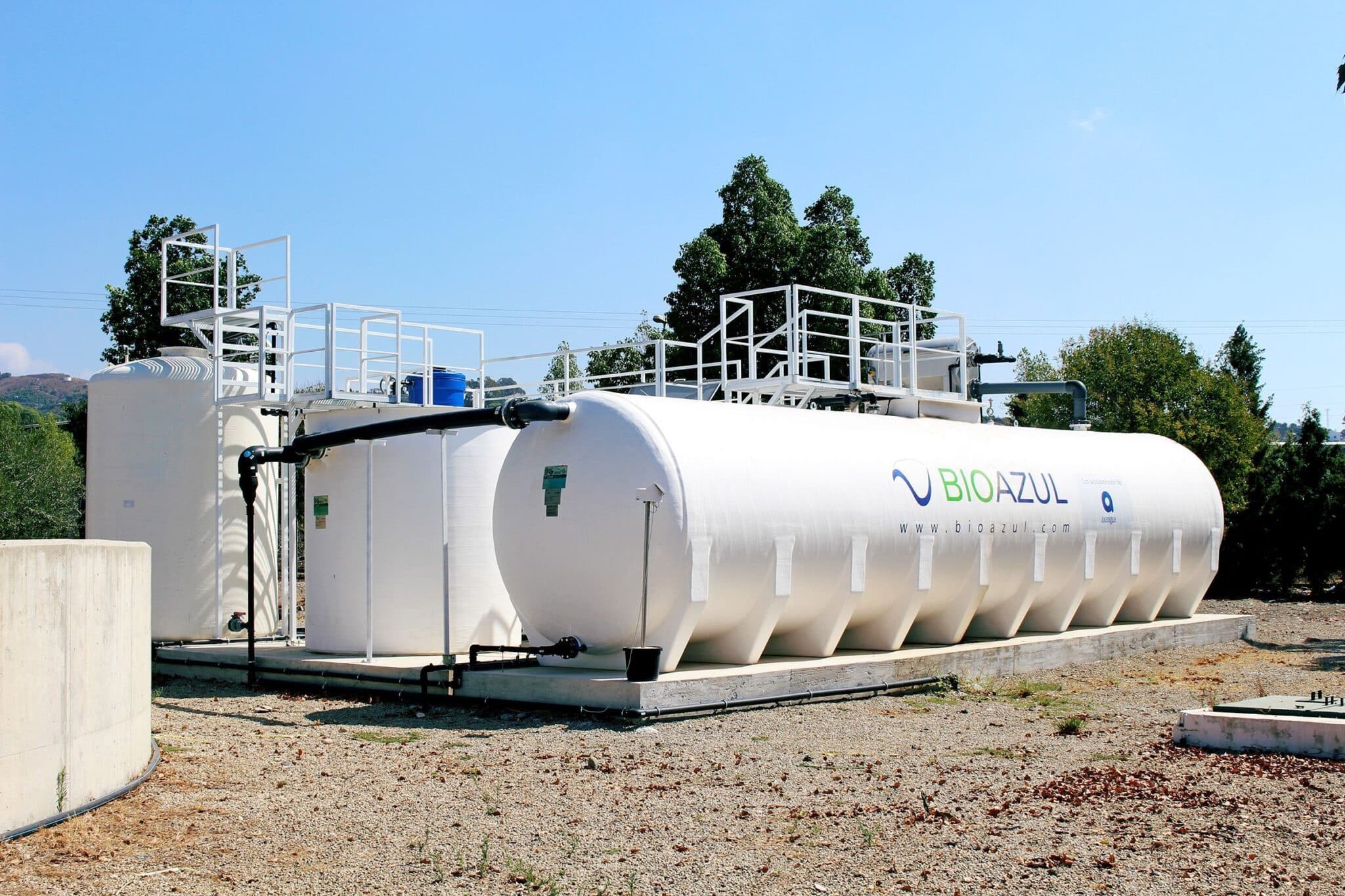 A key action for the success of “nature-based enterprises” is to establish networks and identify synergies with other actors who share the necessary knowledge and skills to provide sustainable solutions to specific problems arising from the climate crisis. In light of this, the “SBN Cluster” of Malaga was born in 2018, an association formed by businesses, professionals, authorities and researchers that is serving as the breeding ground to create business opportunities and favor projects and actions aimed at the promotion and implementation of nature-based solutions. The cluster includes relevant institutions such as the University of Malaga, the IUCN Center for Mediterranean Cooperation and the Municipality of Malaga, represented through Promálaga. 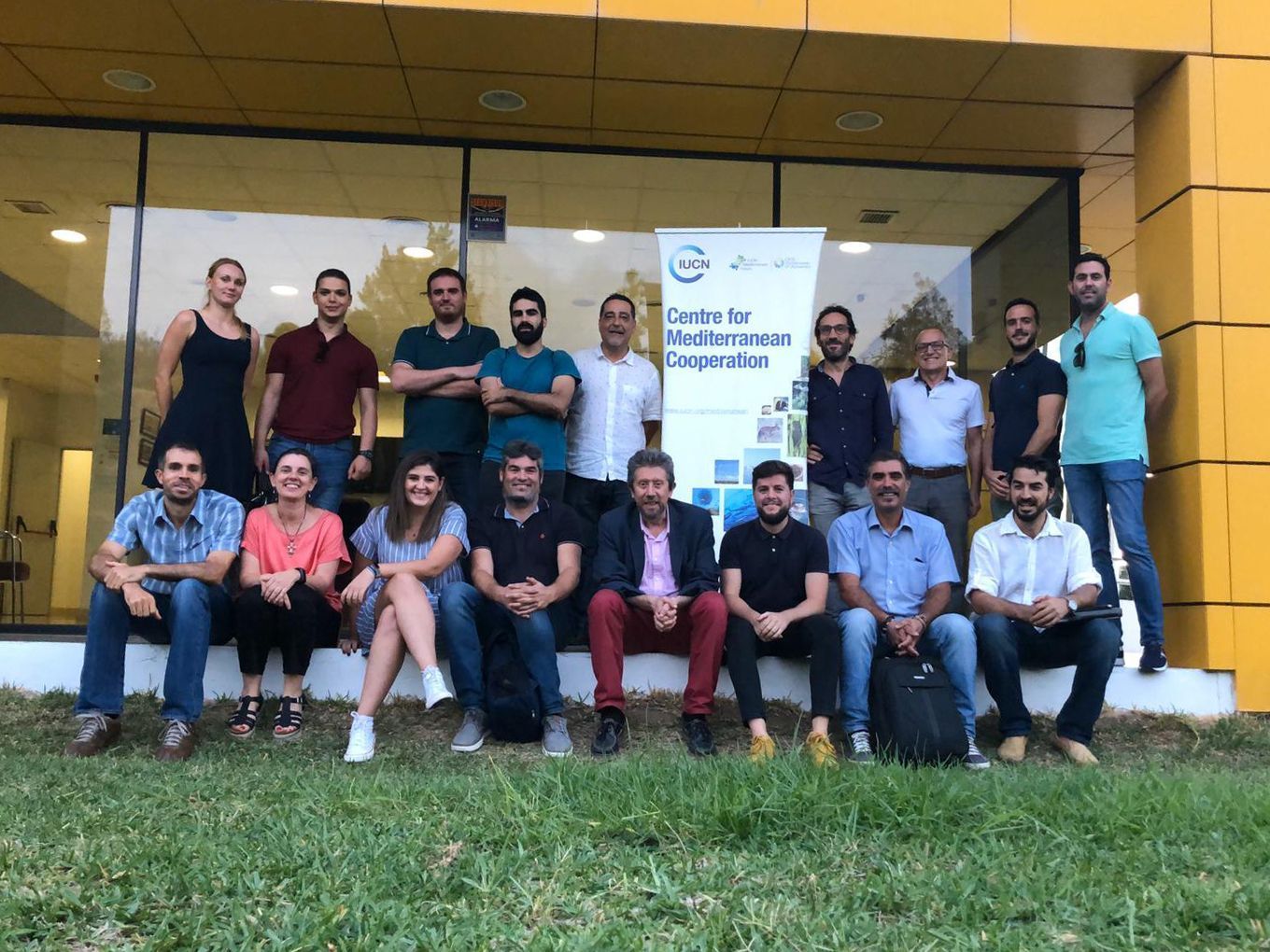 Members of the SBN cluster at the IUCN headquarters in Malaga. Source: SBN cluster

Introduction to the Horizon Europe Programme